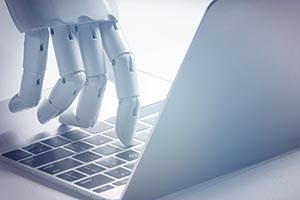 Over my last several blog posts on artificial intelligence, I’ve taken a look at the massive upside for distributors that the technology promises. But with these steps forward in business efficiency comes huge steps back in labor and employment.

The robotics and cognitive automation spoken of by Sergi Mesquida will be the largest contributor to job loss for distributors in the future. This label encompasses the robots used in car manufacturing, telemarketing, and the driverless cars threatening the trucking industry. These concerns are existential for many areas of the country and have been garnering serious attention in the upcoming debate for the 2020 election. Let’s take a look at some of these concerns.

The threat of automation

Andrew Yang, a former businessman from Schenectady, NY, is a Democratic presidential candidate whose entire platform is built upon the threat of automation. Yang’s political position was formed while working for his own non-profit, Venture for America, which works with people in disenfranchised areas of the country to teach them the basics of business and entrepreneurship.

Through working with people in cities like Detroit and Pittsburgh, Yang was able to see the job loss created by automation first-hand. The presidential hopeful points to the disillusionment and anger that led directly to Trump’s election in 2016 can be traced back to job losses from automation. Talking on a recent episode of the Freakonomics Podcast, Yang describes his work with Venture for America as, “pouring water into a bathtub that had a giant hole ripped in the bottom. Because we’re blasting away hundreds of thousands of retail jobs, call-center jobs, food-service jobs, eventually truck-driving jobs.”

For Yang, the loss of this last group – the truck drivers – will be an early indicator of the dramatic fourth industrial revolution that will result in nation-wide turmoil. His campaign’s basic tenet is a form of universal basic income called the “Freedom Dividend” which means $1,000 for every citizen ages 18to 64, regardless of their financial status. Yang is a long-shot for the Democratic nomination, but his platform is a clear sign that the conversation surrounding artificial intelligence has moved beyond a company’s bottom line. Let’s take a look a closer look at the problems facing AI implementation and what can be done to combat them.

The downside of AI

The decrease in labor necessity that Yang foresees is clearly the most pressing issue for AI and varies in severity depending on the source. Let’s begin with the worst case scenario. In 2017, consulting firm McKinsey & Company filed a report which concluded that by 2030 automation could spell the end to one-third of American jobs. An MIT Technology Review article combines estimates from many sources and the responses here paint a more stable picture for the future. The sectors that will be most hit by this loss are those that perform easily replicable and repetitive jobs like manufacturing and fast food work. In regards to Trump’s success in the Rust Belt, Yang points to the fact that, “we automated away 4 million manufacturing jobs” as a major contributor.

The downstream effects of job loss are equally costly and came to prominence on a national stage in recent years. The losses in manufacturing jobs with a relatively stable unemployment rate points to the fact that many laid off workers are no longer looking for jobs. As he stated in the Freakonomics podcast, Yang believes these working-age, often male, former employees, “will start drinking themselves to death, start committing suicide at record level, get addicted to opiates to a point where now eight Americans die of opiates every hour.”

In a perfect economy, displaced workers would find a job in a different sector or educate themselves in a skill that is valuable, but this is an idyllic view of society for Yang. AI is a technology that will revolutionize the way that businesses operate in the coming decades but, in the near term, the rising tide does not lift all boats.

The flip side of AI: Benefits to society

We’ve looked at the benefits of automation earlier in this series, so let’s look at the more general improvements the technology will create. For example, many believe AI will dramatically increase productivity and spur economic growth. McKinsey Global Institute believes the new technology will increase cumulative GDP worldwide by 16% or increase annual economic growth by 1.2% each year. These gains will come from direct increases in productivity such as a robot driver being able to drive hours without stopping and delivering goods more rapidly.

In addition, the GDP increases will come from externalities of a world connected by AI. An externality is something that is not planned for in the business model, but ends up helping people. In the case of AI, that could be a decrease in car fatalities as a result of every car being automated. From Uber’s perspective, driverless cars are cheap and help the bottom line, and society benefits from the change. Because of this dynamic, the benefits of AI are likely to grow over time. According to McKinsey, these gains will create dynamic economies that create jobs and provide economic surpluses that will be able to handle displaced workers.

Whether one believes the doom-and-gloom of Andrew Yang or the even-headed positivity of the McKinsey Institute, it is clear that AI will have a massive impact on the business and labor markets in the coming decades. Each forecast points towards helping displaced workers through the gains created by automation, which is an idea can be spun a million different ways in the political media. AI is likely to be politicized in the coming election and it is something that voters should be educated on before the barrage of political messaging hits in 2020.

Teddy is a marketing intern at Dimensional Insight. He is in his senior year at the University of Connecticut where he plays club soccer and writes for The Daily Campus newspaper