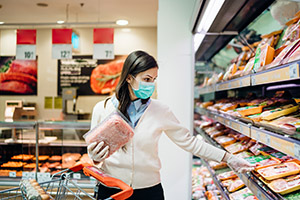 With some states in the USA lifting stay-at-home orders and allowing certain businesses to reopen, focus has shifted to the supply chain. What will be available and what will be missing because of disruptions caused by the COVID-19 pandemic?

The meat processing industry has been one of the industries most affected by the coronavirus. In a late-April full-page ad in the New York Times, the chairman of Tyson Foods Inc. warned that the United States “food supply is breaking” due to plant closures. That same week, President Trump declared meat processing plants “critical infrastructure.” But it will take more than that government order for the industry to stay ahead of demand.

The coronavirus has impacted the meat industry at all levels of its supply chain. The virus itself has sickened workers in a number of plants, forcing closures that have impacted production. As of the end of April, the various plant closures in March and April caused a 25% reduction in pork slaughter capacity and a 10% reduction in beef slaughter capacity in the United States.

The fact that there were plant closures also meant that farmers had to slaughter pigs and chickens that they could no longer sell to companies to process.

The industry has slowed down, but the demand for the product has not. With most of the U.S. still under stay-at-home orders, people are buying at least as much meat as they used to. In many cases, people are cooking at home more often, meaning they are buying more meat than is typical…when the meat is available.

Some stores have already seen shortages, and some places have had to adjust policies to accommodate the current situation. McDonald’s, for instance, is making sure it can maximize the meat it buys, shifting its approach to supply its restaurants with meat-like burger patties, bacon, and sausage based on calculated demand across the system rather than its usual practice of ordering the amount the company believes will be needed.

How the industry could change

The meat processing industry relies on data throughout the supply chain. One of the data points is speed – the quicker the process, the more money the company can make. Chickens, for example, are weighed and then brought out to be processed. The longer they have to wait in the yard, the more weight they lose, so many meat production companies such as Fieldale Farms closely monitor “yard time,” as it is called. Meat companies also rely on workers who have a certain skill set, and they have to keep conditions competitive to maintain those workers.

With workers falling ill and plants closing, companies have to make adjustments so they aren’t left with meat they are unable to process, forcing farmers to euthanize animals they can’t sell.

One option to allow for workers to better practice social distancing is to slow down a production line. By moving the meat through a slaughterhouse more slowly, fewer employees are needed for cutting and deboning, allowing for more space between people. The problem is that the meat companies have fought over the years to increase production speeds, and they are not likely to want to give that up.

The very beginning of the food supply chain is one that doesn’t respond to data as much as it responds to nature. Farmers still have animals that will reproduce, and food will still grow on their farms. But for the industry, it is the data that will help them figure out ways to get that product to consumers in this unprecedented time.

Any cookies that may not be particularly necessary for the website to function and is used specifically to collect user personal data via analytics, ads, other embedded contents are termed as non-necessary cookies. It is mandatory to procure user consent prior to running these cookies on your website.